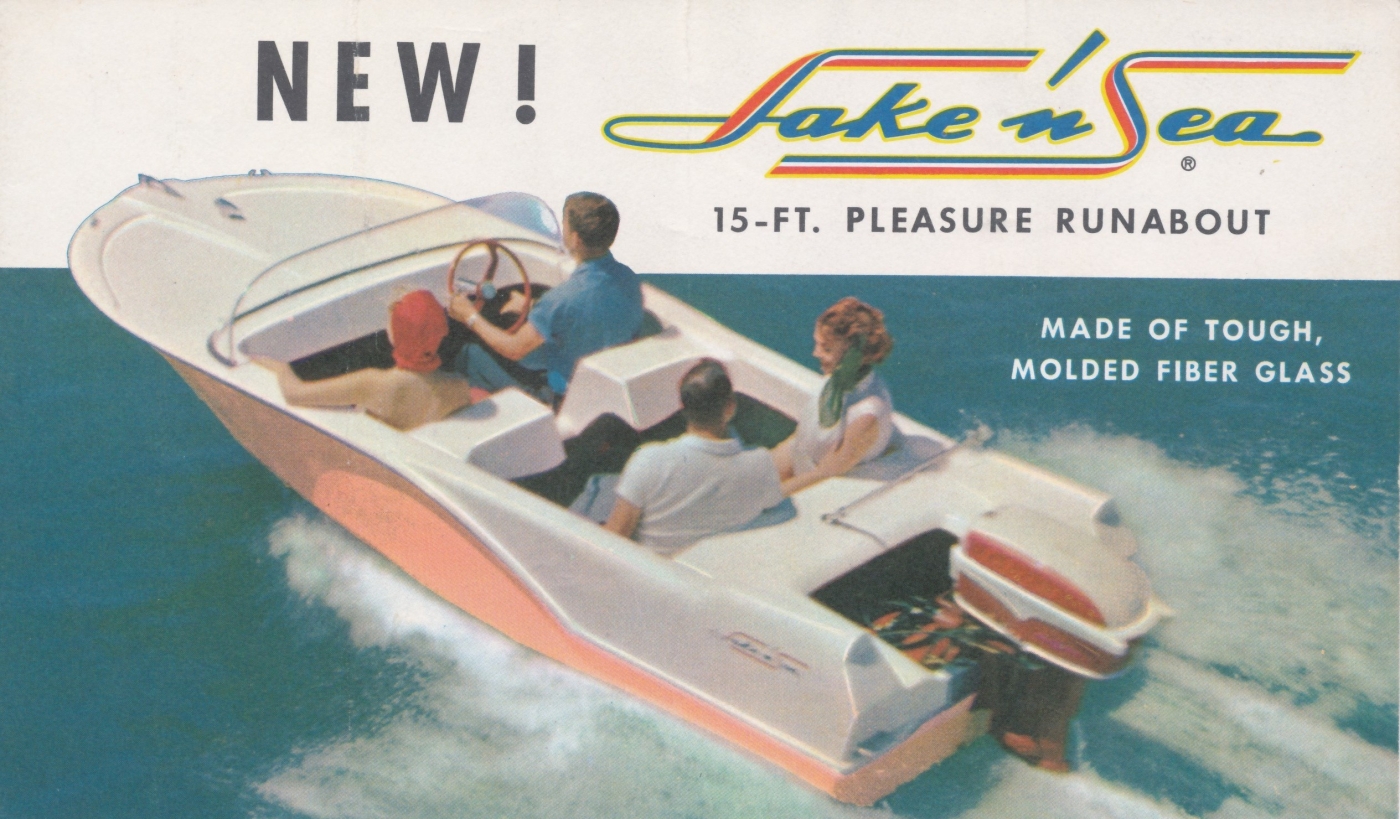 On June 18, 1957, the Chris-Craft Corporation purchased the rights and molds to the Lake N Sea boat line from Lakensea Boat Corporation of Boca Raton, Florida, making it the second company to manufacture the Lake ‘n Sea line of boats. Six months later Chris-Craft gladly sold the company to the Parsons Corporation of Detroit, Michigan. In its wake the company’s ownership of the boat line has acquired the unflattering moniker of “Leak ‘n Sink”, a nickname that I think is unwarranted. I have yet find any proof from company documents or boat owners that the boats ever sank. Yes, company employees did admit that some parts of the boats did fail at points were reinforced fiberglass and plywood met due to poor production techniques but this was not unique to Chris-Craft. Still alarming to consumers and dealers would have been a plywood part, like a transom support or floorboard, coming apart from its fiberglass and resin hull. One has to wonder why the company built only 266 Pleasure Runabouts before abandoning the rapidly growing fiberglass boat market and not try to improve their production techniques like they had done for years with wood boat construction? We may never know. But here is what we do know.

In 2003, I interviewed Christopher Smith, the grandson of Christopher Columbus Smith, the founder of the Chris-Craft Corporation, to learn more about how and why this purchase was ever made by a traditional wooden boat company. Here is what he had to say with some minor editing:

“The Lake ‘n Sea. This was our first attempt at fiberglass boats. We bought these molds from an outfit down in Florida. We built a couple hundred of them without really doing any research. What we failed to do was gel the interior of the boats after they were hand laid up. The gel is what keeps the water out of the boat—you have to gel the outside, of course, so the water won’t come in. You have to gel the inside, too. We found out the hard way, to control the moisture from the wooden stringers and the wooden transom, the reinforcing parts that we put in the boat. So, the Lake ‘n Sea, the water got to these parts, they deteriorated and literally the boat fell apart. Soon got the nickname from our dealers, Leak and Sink. We owned the line for just a couple of years when this happened. We lost so much money on it, that they just sold it right then. The family said that fiberglass was not the thing to build a hull out of. Again, we were building cabin tops and parts, but not hulls at that time. The Chris-Craft family, the Smith family, never did build a fiberglass boat after that. I think if Chris-Craft wanted to have stayed with it they could have been successful. We learned now that you have gel inside of the boat. It was a good little design; it was a cute little boat. I’ve never ridden in one, but I liked the looks of it. But they just made the decision, and this was the way the Smiths did things. They said, ‘No, we don’t want any more to do with it at all.’ All we wanted was the molds and the people that lay up the boats. This is the mistake we made was not keeping the engineers of that particular company to tell us how to lay them out. At that time, I was an engineer over here in Holland and all the work was done, either in Algonac or down in Pompano Beach, and I didn’t hear those details. They boats were actually built at the Pompano Beach plant.”

Smith had most of the information right, according to company documents. On December 10, 1957, management, manufacturing and sales department heads decided to discontinue the manufacture of 15′ Lake ‘n Sea Pleasure Runabouts. The next day Wayne Pickell announced the decision to the company’s network of 165 domestic and international Lake ‘n Sea dealers citing that “the manufacture and selling of fiber glass boats at this time is not our forte.” At that time 40 completed boats were in the Pompano Beach, Florida plant and 11 in the Algonac, Michigan plant and dealers were encouraged to contact division representative Gill Gundlach with any questions. In addition, parts to make the boat line were also at the corporation’s Salisbury, Maryland plant in addition to the other two, including a deck mold for a utility model, according to a later sales contract inventory. This deck mold might have been from the Lakensea Boat Corporation purchase since that company did offer a utility model but not Chris-Craft. This memo was excitedly shared with John Parsons by Ray Darrow a local Lake ‘n Sea boat dealer. By December 17, John Parsons had agreed to purchase the line to add to an earlier, simpler designed boat line of 12′, 14′, 16′, and 19’ runabouts purchased from Hilman Barger’s Custom Molded Fiberglass Products Company of Arizona. The Barger- designed line was established in 1957 to help reemploy at least some of the 400 Parsons Corporation workers left jobless in their Traverse City Michigan plant after defense contracts were reduced in size.

Parsons Corporation purchased the Lake ‘n Sea brand, molds, and six new boats from the Chris-Craft Lake ‘n Sea Boat Division for the selling price of $17,932.92 on January 7, 1958. A week later Chris-Craft issued a sales bulletin to the public announcing that remaining Chris-Craft branded boats with hulls in colors like sunrise pink, seafoam green, and yellow chartreuse were available for purchase for $416.00 F.O.B. (free on board) from the Pompano Beach plant instead of the original $755.00. Chris-Craft had already purchased national advertising until March 1958. Parsons Corporation was more than pleased to receive the extra boost in free advertising until their marketing department got out their marketing materials.

In early 1958, the Aircraft Division of Parsons Corporation of Traverse City, Michigan began producing the same Pleasure Runabout style, along with the existing Barger-designed but with much more skill than Chris-Craft, which it had gained from working with reinforced fiberglass to make helicopter rotor blades and Barger-designed boats. The Special Products Division took over production in the spring of 1958 before finally becoming Lake ‘n Sea Division midyear. The Barger line would remain until leaving in late 1958.