While rarely seen in vintage boat collector’s collections the Lake ‘n Sea Division of the Parsons Corporation did make small utility and runabout boats designed for fishing, hunting, and fun at a low cost.

In the spring of 1958 Parsons Corporation introduced a limited number of models to the public which included the 12-ft Utility and 14-foot Custom Utility. These utility models were designed by Hilman Barger and made only during the spring of 1958 while Parsons designers worked on designing a line of their own. Barger left the company in August 1958 and took his designs and molds with him. According to company records Parsons Corporation built 46 12-ft and 9 14-ft models. No surviving examples of either model are known to exist.

The utilities offered during the 1959 model year were quite different from those designed by Hilman Barger. That year the company offered 13 different models of boats, 11 of which were brand new, including the 110 pound 12-ft Manistee and 200 pound 14-ft Au Sable Fishing Utilities. Each model was lightweight and perfect for hunting, fishing, and all-around boating. Advertised as attractive with the same colors offered in the more deluxe models, the two models were billed as practical and made with molded-in helmsman and passenger seats, side ledges, and flotation. Each could be powered by rowing or an outboard motor.

The company also offered a 14-ft Au Sable Runabout model that was billed as value-packed boat with room for four passengers. The outward appearance of this model was much like the more expensive 14-ft Caribbean and 16-ft Arrowhead models and less expensive. The deck was very similar to the more deluxe models but the dashboard was not.

The transom was molded to have the same shape seen in the more elaborate louvered transoms seen on the larger more expensive models. According to company memos it was much easier and cheaper to make this model without the extra transom detail part and it was reflected in the price to consumers.

As early as July 1959 John T. Parsons, president of Parsons Corporation, had decided to make drastic changes to the small boat line according to company records. In a memo to his design team he advised them to either drop or redesign the Manistee and Au Sable Fisherman models  due to cost and low sales and replace the Au Sable Runabout with a stripped down Caribbean model. Parsons Corporation did not make the Manistee or Au Sable models in the 1960 model year and built only the larger boats, with exception of the 18-ft Grand Traverse cruiser, which was also dropped from the line. Of the Au Sable boats manufactured, 47 had to be recalled to the factory for cracking in the corners of the hulls and collapsed flotation, which plagued the entire company line.

Because those models were built for only one year accounts for the low number of surviving hulls in collector’s collections. According to company records four 12-ft Manistee boats were ordered and four produced in May, two of which were replacements for two bad ones. The 14′ Au Sable faired much better with five produced in April, 27 in May, 16 in June, and one in July, but records did not differentiate between the Fishing Utility or Runabout models. Orders for both models were cancelled in late May due to low sales and the inventory sold dealers needing boats or sent as replacements. My database of Lake ‘n Sea boat owners there are only four 14-ft Au Sable Runabout models known to exist. That is what I consider rare. 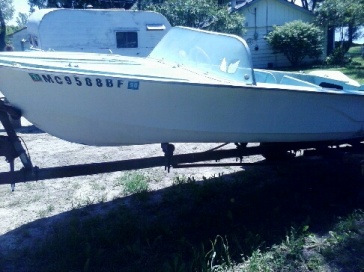