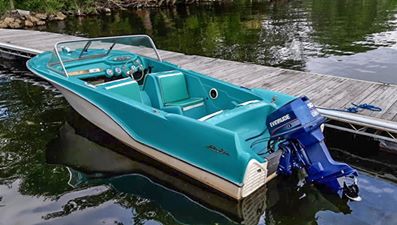 Without a doubt most of the Lake ‘n Sea boats models are unique and easy to spot, largely due to the design of the transoms and graceful lines. This is especially true for the 18-ft Saratoga model. I dream of owning one of these beauties. A lot.

The 18 foot Saratoga model was introduced in 1959 by the Lake ‘n Sea Division of Parsons Corporation as one of its largest and most expensive boat offerings. Like the smaller 14-ft Caribbean and 16-ft Arrowhead models the 18-ft Saratoga and Grand Traverse cruiser had newly designed transoms that made them unique in the pleasure boat industry then and to this day. The Saratoga was offered in three styles: Sports Utility, Runabout, and hard topped Landau. Any of the three were big, husky, and able to handle up to 100 h.p. either with a single outboard motor or twin 50 h.p. outboards for 6 to 10 happy passengers. Prices ranged from $1,595 for the Sports Utility to $2,395 for the Landau-roofed version.

For the 1960 model year only the Sports Runabout and Custom Runabout models were offered in the severely reduced Lake ‘n Sea lineup. The model was listed as 19-ft that year due to the company measuring around the deck instead of down the middle for, some reason, even though the model remained the same length overall.

As of today, I have registered only two of these beauties in my database and both were made in 1959 (9675 0022 and 9675 0024). From these low hull numbers, original cost of the boat, and its size, I do not think many were made that year and most likely none in 1960. Company records show only 11 Saratoga models shipped between January and August 1959, the end of the 1959 model year production. Locating one of these models would be a great find second only to finding one of the two 18-ft Grand Traverse cruisers.

Below is hull number 9675 0022. It is the oldest 1959 Saratoga I have registered to date and is owned by the second owner’s family. It was purchased from the original owner in 1966. It still has the original seat cushions in the shape of the transom, like the Arrowhead models, with subtle differences.

Jim Wildeman purchased his 1959 Saratoga model (9675 0024) in 2016 and uses it regularly. Check out that dashboard arrangement and transom detail and built-in read facing seats. Very special.

After the 1960 model year the Parsons Corporation stopped making Lake ‘n Sea boats. In 1961, Michigan Fiberglass Company, the subcontractor for the 1960 model year 14-ft Caribbean and 16-ft Arrowhead models, made the 14-ft Caribbean and 16-ft Arrowhead models under their ownership according to photographs in the Holland, Michigan factory and surviving boats. No 1961 18-ft Saratoga models have been found to date.