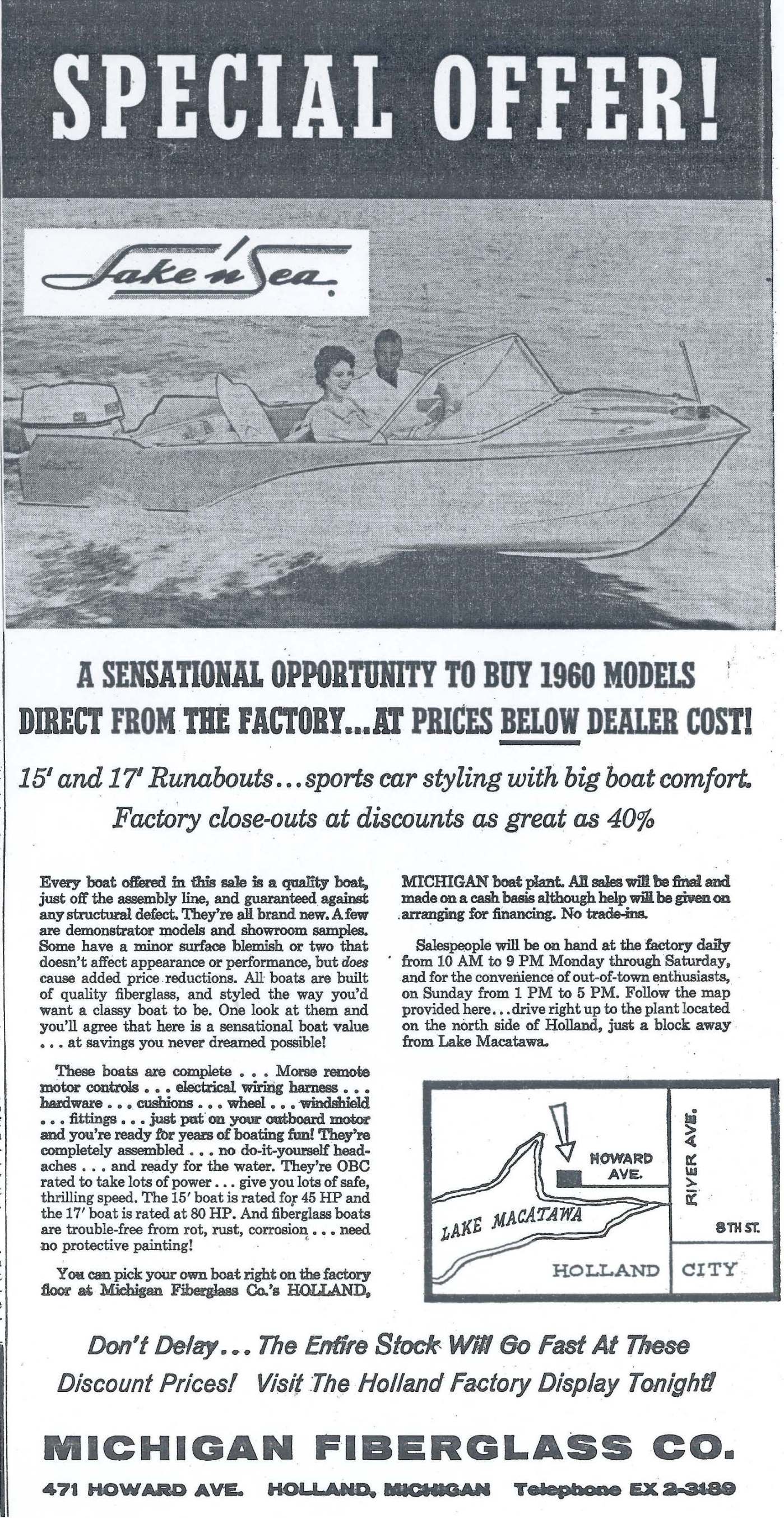 Michigan Fiberglass Company (MFC) cannot be blamed for killing the Lake ‘n Sea boat line but it was part of the end for the brand. Parsons Corporation contracted with MFC in March 1960 to save money and refocus on the fiberglass products they could sell at a profit but the plan ultimately failed. MFC employees simply could not provide the same quality of boat making as the Parsons staff when it came to proper fiberglass boat construction. At the Holland plant some of the boats were repaired and many were ruined when separated from the mold due to bad releasing agents and stacked up outside the building awaiting disposal. The idea of saving money through outsourcing did not work for the parent company.

In a May 17 memo to John Parsons, S. Steed, and Gus Linell, and Donald Goodland sounded much more upbeat and after visiting the MFC plant and seeing improvements throughout the production of the Lake ‘n Sea boat line much to the credit of a Mr. Jensen who apparently was in charge of production. Goodland attributed most of the past problems at MFC to lack of detail to the finish by the new, inexperienced, untrained workforce and a new product. The optimism did not last, however, as Linell reported to Parsons in early June that most of the Michigan dealers were unhappy with the boats they received, especially with the popular Tropical Suntan colored boats which were literally blistering when exposed to the sun at a rate of 85% due to the color pigment not reflecting the sunlight as effectively as the other lighter colors. He also reported that the green colored boats were especially hard to move by dealers who also refused to stock boats built by MFC. The news was worse at the MFC plant. There, out of 174 boats built, those shipped included 55 15-ft Caribbeans, 33 of which were ranked as “firsts” and 22 as “seconds.” It was worse for the 17-ft. Arrowhead model. Out of 24 shipped only 16 were ranked as “firsts” and 8 as “seconds.” Linell further cited dealers complaints concerning the inability to deliver boats when needed, shortage of colors when needed, general quality below par, too high a percentage of seconds, and a slack in dealer sales.” He did think that extending the production run at MFC might help to produce enough quality boats to recover some dealers now without boats to sell and give MFC more time to improve enough to possibly produce the 1961 line for Parsons.

On June 27, 1960 John Parsons and Lawrence Meyering signed an agreement releasing MFC from the March 1960 contract. This amendment allowed MFC to use the raw materials, molds, and tools provided by Parsons to produce an estimated 50 boats until August 31, 1960 and keep any money made from selling Lake ‘n Sea boats that they made from that date. Changes to the boats included the absence of the Parsons Corporation branding, most notably the serial number plates in the front cockpit and the nameplates that adorned each side of each boat. Soon after the contract was signed, MFC was advertising to the public special discounts on Lake ‘n Sea boats direct from the factory in Holland.

The idea of saving money through outsourcing did not work for the parent company and by August production had stopped at the Traverse City plant. In Holland, Meyering moved his operations to nearby Borculo, Michigan where he continued building the Lake ‘n Sea 15’ Caribbean and 17’Arrowhead models in smaller quantities and added foam- filled, fiberglass sailboats called, Porpoise and Super Porpoise, to his boat line.

Throughout 1960, company records showed the Parsons Corporation investigating alternatives for outsourcing the making of boats during and after the MFC disappointment. Domestic companies included Slick Craft Boat Company of Holland and the Commando Boat Company of Tulsa, Oklahoma. Slick Craft made a very fine product and wanted to move to supplying boats and not trying to sell boats. Commando Boat was not contacted after a less than stellar financial report from a Dun & Bradstreet Report review. Investigations into producing the line in other places around the world were also made from retaining certain rights over the molds and name to outright selling everything. Parsons even contacted the president of Chris-Craft Corporation, Harry H. Coll, to implore him to buy back the boat line, as early as March 1960, but without success.